After a long and somewhat exhausting journey we finally made it to Tashkent at 6.30am, excited to arrive but more excited to catch up on some sleep. We were greeted at the airport by Alan France, who welcomed us all to the country, and soon after we were in the coach on our way to the dormitories, which is where we would stay for the majority of the day, resting and socialising with the students from Westminster International University, who’s hospitality, even within those first few hours, shone through as some of the best I have experienced and everyone seemed happy to meet and get to know each other.

The first day of Summer School consisted mainly of relaxing. After a brief welcome talk, we were given our rooms, which were massive compared to any student accommodation we can get back in London. Consisting of two single beds and a shared bathroom, we were more than happy, but nothing was as pleasing as seeing a fan in the corner of the room! The temperature here is hotter than I have ever experienced in the past and becoming accustomed to it may take a while. Over the next few hours we had all scuttled off to our rooms to shower, sleep and unpack, ready to meet back downstairs at 6.30pm to go for dinner with students and staff members. After getting a hair raising taxi ride to the restaurant, we all arrived and took our seat. Surrounded by a mix of students from both London and Tashkent, conversation started flowing and before we knew it our Russian style dinner had arrived. After getting to know a number of the Uzbek students, it was time to retire to our dorm, for a much needed nights sleep. 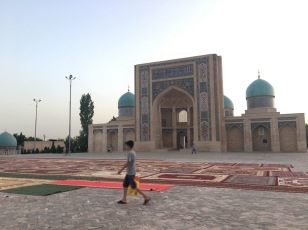 Day two of Summer School and we had a full day lined up. Once again we found ourselves in a taxi and on our way to the University for a opening ceremony talk. Greeted by friendly faces and a lot of breakfast, we started our day. The food is different to what I would normally eat, consisting of lots and lots of meat and cheese, but I was giving it a go. After a few hours at the university looking around the campus, we were taken on a City tour of Tashkent, which was very interesting and demonstrated the amazing beauty Uzbekistan has to offer, both architecturally and naturally. We visited Independence Square, Parliment and a number of both old and new mosques scattered throughout the city, accompanied by Uzbek students pointing out points of interest along the way and telling stories of the buildings we passed. With the sun setting we made our way back towards the university and took a short walk to the Irish Pub where we were due to get dinner and relax, by this point the heat had taken a lot of my energy and with another day done, I was once again pleased to get some sleep.

Tomorrow is another day, with my original perceptions of the country challenged and in some cases changed, I am excited to get to know the City and the people who call it home.